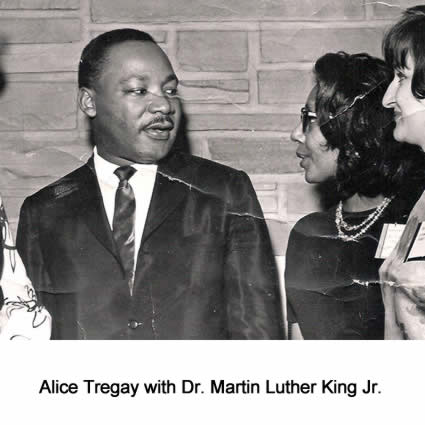 Alice’s Ordinary People is a documentary about Alice Tregay, an unsung heroine of the Civil Rights Movement. Her remarkable story spans the historic period from the marches of Dr. King to the election of Barack Obama – her great contribution is the thread which connects the two. Under the leadership of Reverend Jackson, the months that Alice and her “ordinary people” spent picketing led to real change. It was through her Political Education class that Alice had her most significant impact. Over a four year period, thousands were trained to work in independent political campaigns.

Join documentarian Craig Dudnick as he discusses the film and gives us an overview of the Civil Rights Movement as well as Alice’s role in bringing politics to the Movement.

Alice’s Ordinary People is available free on Kanopy, the Library’s streaming media service. Attendees are encouraged to watch the film beforehand, but it is not required.

Please register below to receive your Zoom link.  It will be sent two days prior to the program.

VISITS TO USE THE CHILDREN'S ROOM ARE BY APPOINTMENT. CALL AHEAD OR SEND AN EMAIL TO LEWISBOROLIBRARY@GMAIL.COM