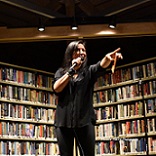 WOW! Thanks to your overwhelming response, seats to our Hard Headed Comedy Showcase sold out in a week! Many thanks for supporting this Library fundraiser.

Looking for a unique Father’s Day gift? How about a NYC comedy club experience – right here in Lewisboro? That’s right, it’s the return of the “Hard Headed Comedy Showcase.” This event features SIX stand-up comics – who regularly perform on TV, podcasts and venues such as the Comedy Cellar and the New York Comedy Club – now performing on the stage of the Library!